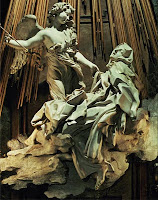 Our orchestra sponsors an annual event in October for string players called "Play-for-a-Day" and in 2011 it was particularly successful. The theme was Baroque music and such a simple way of unifying the day had considerable appeal. There is something about this music genre that resonates clearly with our own times. Naturally, the beautiful music room at Pauntley Court, a sunny day and a great group of musical personalities all added their contribution but I also thought it would be worth a few words exploring where this particular music came from and why it is so relevant to our techno. age and discover where the resonance comes from.

When anything is put in a context it can become meaningful. In fact, unless "anything" has a context, connection, a place in the world, it is meaningless and irrelevant. During that day, I introduced one or two facts about the times in which the music was created to see if this affected our appreciation and enjoyment of it. For example, what has relatively recently become known as the Baroque period in music covers roughly 1600 to 1750. During the seventeenth century, there were two main influences at work, one in northern Germany and Holland, the other at the other end of Europe in Italy, more specifically in Rome. Prior to this period, musical harmony and counterpoint developed primarily in devotional church music. Then, in Northern Europe, this developed much further, especially in the art of fugue. In the Italian enclave, there was much more concern for the form of the music and this also developed - the concerto grosso, sonata form, etc.


Surprisingly, despite the physical hardships of travel, many musicians moved about over considerable distances, thirsty for new ideas and to hear the new works of other composers. The result was that the two streams of Baroque fused and led to the period of high Baroque at the beginning of the 18th century.

This was the time of great advancement in science, Copernicus, Galileo, Newton, et al. Indeed, this is one of the great turning points in the history of western civilisation when the medieval philosophy that had been based on the previous 2000 plus years of received wisdom loosened its grip and new, revolutionary discoveries were made. Perhaps the most significant was that the universe no longer revolved around the earth. This simple revelation undermined not only medieval science and scholastic philosophy but made people feel psychologically uprooted in a world that had previously been ordered and secure. Baroque music represents this security. It is an expression and re-affirmation of the perfection of the universe and its creator in the face of challenges from science and technology.
This chimes with modern times with its accelerating increase in change and the continuous existential crisis that runs along in parallel. Listening to and playing Baroque music counters the unsettling discomfort caused by lack of certainty, with its symmetry and perfect form and thus many of us respond so positively to it. Baroque doesn't sound dated because it was not written by its composers as a means of personal expression but of something that is universally experienced today or in any day, the reality of our existence in an infinitely beautiful and awesome universe. I think we touched on that at Pauntley.
Posted by Bill Anderton at 14:06