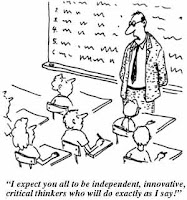 And on an even more personal note (second gripe), why do we musicians have to wear that funereal uniform at concerts which simply adds to communicating institutionalised elitism?  It's just not on as far as I'm concerned. Classical music is much more rock 'n' roll than this.  It is a living, developing, exciting music and the old, now rubbing shoulders with the new, is just as relevant today as it was centuries ago. Jazz doesn't have this problem, even though it encompasses just as many different forms. Its practitioners simply refer to it as "The Music". I wish we could do that too.

What stimulated this little outburst was thinking about how many people, especially youngsters, are put off classical music because of these negative associations, "It's too difficult; it's boring; it's only for the chosen few, it's out of date" and other misapprehensions. I've always felt that my orchestra should be more involved in combating this with music education, not just through rehearsals, concerts and workshops, but more fundamentally. At some point in the future this may become a reality, especially as the orchestra is growing by leaps and bounds in membership and musical quality. The value of music education is not in doubt and this leads to my third topic.

Until September of this year, the music education in schools is in the hands of local music services.  From September, this will all change as the government's first national plan for music education swings into action. This plan is all part of the financial cuts that we are having to accept in one form or another. Going immediately beyond that downside, there are some great ideas here.

Responsibility for providing music education in schools will be taken away from the music services and instead will be administered by "Music Hubs" which will be formed by appropriate organizations, including professional orchestras and ensembles. Funding will be reduced by a massive 20 per cent over the next couple of years, but, conversely, what is available will be guaranteed for the first three years of the scheme to facilitate proper planning. Hub applications will be assessed by the Arts Council, not previously involved in distributing funds for education and t
here will be a new music teaching module for trainee primary teachers. The aim is to provide a national plan for music which will eliminate the previously patchy service and bring an end to discrimination in terms of pupils' ability to pay.

We should be supporting this in any way we can. Feedback, please.
Posted by Bill Anderton at 16:25