The Spirit of Music - A Day Course 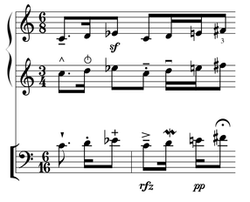 Understanding the theory of music and how it has developed historically deepens a player's and a listener's appreciation. To this end I'm planning a day workshop when you can enjoy exploring some musical topics that will provide the tools to go further along your chosen musical path.

What I'm concocting is a day exploring music theory, which means explaining music's modes, keys and key changes, intervals, harmony and dissonance as well as the way the music is put together - its "form".

However, I don't want this to be an academic text-book type experience so I'll be putting all these elements into a context of the history of music from classical Greece and Pythagoras up to contemporary times and its music. The history of western music moves through particular phases, moving from music of single line melody to complex polyphony, made possible when music notation was developed and music could be written down.

There is a unique element worth exploring in this mix and that is specifically what happened to English classical music during those periods, it being largely destroyed, never to recover from Henry VIII's dissolution of the monasteries and then the church's Reformation which continued this negative effect. The point is that the music theory we study today is the result of all this history and context.

Then, of course, came the root and branch changes in western music at the beginning of the last century followed by a plethora of fast-moving developments. Today, there seems to be a yearning for the simpler, more spiritual music of times gone by and hence, perhaps, the success of minimalism and of the Early Music movement.

Anyway, I digress. The day I'm planning will be about the foundations of music and how it can be analysed to help enhance the experience of both player and listener. More than this, such an exploration in the historical context I'm suggesting will, hopefully, help to get at the heart, the spirit of the music we hear and play.  Anyone up for it, let me know. The day will be in the spring at a venue local to Newent. There are details about this workshop on my "Final Score" website.