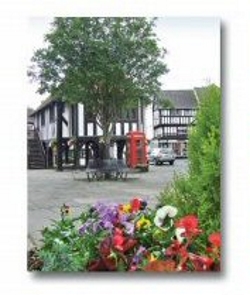 It's taken over seven months to complete this composition and I felt the need to express one or two thoughts after such a long time living with it. It's the most ambitious piece that I've come up with so far and the writing process has been interesting, to say the least. The idea was to take some pictorial themes in and around Newent and to represent them in music.  There are five: the lake; its spring daffodils; the market square and main streets; the Onion Fayre; and May Hill with its top-knot of trees.

Music is an abstract art so the listener is more important than the composer in deciding how to respond to or interpret the music. However, because of my relative inexperience in composition the writing has been an instinctive rather than academic process and the end result seems, to me, clearly descriptive. Satisfyingly though, the music stands on its own, without any titles or descriptions to go with it.

The brief to myself was to make the music enjoyable to play and listen to and was written particularly with the Newent Orchestra in mind. Happily, having (hopefully) met these criteria this has not meant any dumbing-down.  Compared with a Shostakovitch or a Prokofiev opus, my stuff is easy going, but easy does not mean the music is lacking in depth or interest and listeners will detect a fusion of influences from Baroque to folk, including calypso!  It's my hope that the symphony will have appeal well beyond the boundaries of Newent.

A concert has been scheduled to launch the Newent Symphony at the end of March. In keeping with the descriptive, even visual nature of the music, an art exhibition celebrating Newent in art, poetry and photography will be run in conjunction with the concert. This is quite an ambitious project, involving a much expanded orchestra membership, its brass contingent and percussion, involving also a complete community cross-section of young and old alike to both create the event and come and listen. Although this sounds somewhat ambitious, a ringing endorsement has been achieved already with the awarding of a substantial grant for staging the concert. That was great news to me and I openly thank clarinetist, Claire Townshend, for her support and for obtaining this bonanza for our orchestra.

You can preview the music at www.billanderton.uk/compositions.html
Posted by Bill Anderton at 21:36 No comments:

I've been doing a little research into local folk music. The reason is that I wanted to make reference to one or two old, local folk tunes in an orchestral piece that I'm writing. It appears that Cecil Sharp, the erstwhile gatherer of folk tunes visited Newent in 1910 when he noted tunes from "Charlie" Baldwin when he was in Newent workhouse. The workhouse is now our Community Centre building on Ross Road, where, a nice little coincidence, the orchestra rehearses. Charlie Baldwin was born in 1827 at Gorsley Common, described (I like this!) as a "wild and untamed place", on a drovers' route from Wales and a stopping place for travellers. One of several tunes Cecil Sharp collected from Charlie was 'Polly Put the Kettle On'.

Folk and classical music can seem miles apart and this gap is defined in medieval times when the goals of sacred and secular composers were different. Composers of sacred music sought to bring a mystical atmosphere to church, while secular music was made solely for entertainment, for dance and to express love. Sacred composers were formally trained while secular composers were not. The two forms of music represented a musical separation in society between the trained and the untrained, basically between the privileged and the poor. This division still exists today but not so clearly in terms of rich and poor but as an unfortunate musical snobbery: there are the commoners who love their folk, pop, rock and country music, and those who are 'classically trained' and ostensibly appreciate the finer things in music. At this point, I'll drink a toast to crossover music. 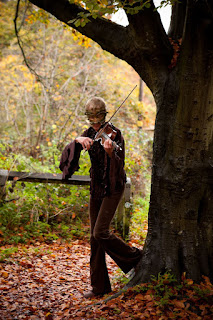 Where was I - oh, yes, onions. The music I'm attempting to write is a tone poem, with scenes inspired by some aspects of life in Newent.  One such scene is the Onion Fayre, which takes over the town for one day in September (this year on the 10th). Revived in recent times the fayre has medieval roots so I thought it appropriate to make reference, in music, to medieval folk traditions and combine this with something more modern.

The Newent Orchestra has a stall to promote itself at the Onion Fayre and this year, will be doubling the size of the stall to present some live music throughout the day. If you are wandering past, you might hear some of our woodwind and brass musicians, and one or two string chamber groups.  You might also hear the strains of a couple of those scenes in and around Newent depicted in music, one in particular owing something to Cecil Sharp and Charlie Baldwin.
Posted by Bill Anderton at 09:26 No comments:

Yer know that Nick Hornby did that thing about making top tens - what's yours?  Like, top ten best albums of all time, or yer top ten Motown recerds, or top ten bass guitarists or... well. u get the idea.  Ten is actually quite a lot.  You get to three or four, whatever the category and then have to start thinking really hard and that hurts.  The thing is, that top-ten whatevers changes, too.  Depends on your mood and, the main thing, discovering something new and unexpected.  So here's my proposal.  Never mind the top ten, that's too hard.  Let's make it top five. Apart from anything five focuses the mind.  Makes you think about the BEST.  No buts, not ifs, no nearly-rans. Sharing a top five means too that we give those top tips that really mean something.  You'll know they're worth looking into, especially if there's something you haven't heard of.

Here's a choice for the top five albums that I want to listen to right here, right now, Saturday night.  The peculiar thing I realise on thinking this through is how wildly unrelated is my right-now musical taste: Strypes, Little Victories; John Adams (the one who lives in Alaska), Become Ocean; Royal Blood, Royal Blood; Howard Skempton, Lento; Oh, and I won't bore you with the fifth.  Safe it to say it's some 17th-century Baroque stuff.  How pretentious is that.  There you go; I've bared my soul.  There's nothing else.  Just emptiness.
Posted by Bill Anderton at 21:20 No comments: