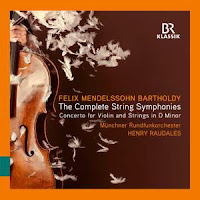 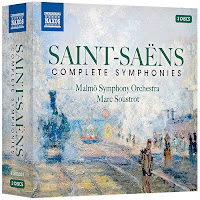 Posted by Bill Anderton at 11:54 No comments:

Reviews: In the Mood

Nothing can replace the experience of live music. There are, however, some pluses inherent in recordings. There is the obvious, that the choice is infinite. There is another that I'm appreciating more these days and that is the ability to choose listening material to suit your mood. Sometimes I like listening to Bruckner. Sometimes, I'm just not in the mood. Choosing what one listens to can be an interesting, self-reflective process. Here are my new CD recording choices that provide a widespread array of genres. Something here for everone, to coin a phrase. 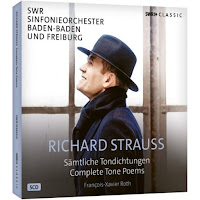 The symphonic poem represents the step beyond the classical symphony, appearing in places where composers were creating a national music.These by Strauss are, for me, always a treat, full of quiet moments of repose, soaring strings and powerful brass, not to mention the endless themes and motifs. Simply the best! An addition to this is Strauss's musical epitaph, Metamorphosen, scored for 23 solo strings. 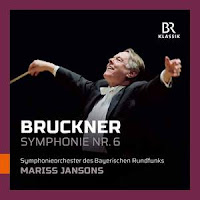 Choose your moment to listen to this carefully, for like all Bruckner's symphonies it is a massive listening undertaking. Commit for three quarters of an hour of intense symphonic outpouring, a relatively short symphony for Bruckner. His symphonies always adhered to the same symphonic form, but within that framework are exploited all the endless possibilities. 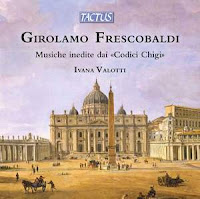 These are beautiful short pieces of atmosphere, a stream of spiritual delight on the old organ (1565) of the Mantova Basilica. The time period from whence these came is, in music, the beginning of Baroque experiment and innovation, when Frescobaldi, from Ferrar, played a leading role in shaping the language of keyboard music. 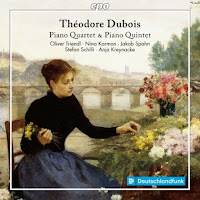 The chances are, this French composer is new to you. Born 1837, died 1924, known in France as a composer-organist, Dubois was born in rural Champagne and his musical life developed as a child in Reims at the cathedral. These are Elgarian pieces without the angst, perfectly formed. They are so dated, but in a nice way! The oboe in the quintet is a relatively rare instrumentation so adds that little something to the experience. Easy to picture these pieces performed over 100 years ago, surrounded by the French equivalent of Victorian paraphenalia, dress, decor.

Posted by Bill Anderton at 11:17 No comments: 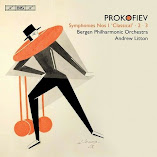 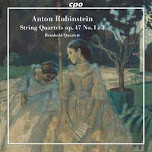 As a composer, I've developed some (to me!) interesting abilities, ideas and techniques. I'm beginning to know what I'm comfortable with and what is out of my comfort zone. Sweeping musical statements I can do but they don't come naturally. Harmonic progression I can do, but takes work. And the need to 'change key' to maintain interest is an unwanted compositional distraction. I have absorbed a whole variety of compositional facets: counterpoint, fugue, serialism, minimalism, form, phrasing, harmony, discord, sequence, repetition...  In addition, in working with groups of musicians, chamber strings, woodwind, brass, full orchestra, I've absorbed some ability to orchestrate, to choose an effective combinations of instruments for a given circumstance.

The result that emerged is a liking for 'painting with music', by which I mean making brush strokes of short musical statements and joining them up within a context that frames them to make a whole. A brush stroke can be anything from a single note or chord to a run of semitones, from a random sequence of notes to a carefully constructed phrase, a piece of counterpoint, a scale.

The first project using this newly-found musical canvas is a series of four meditations on haikus by Japanese masters and I chose one for each season. Here is Winter: https://youtu.be/GadT1gS5b2g

The process is, first, to choose a subject and then to use that subject to suggest the atmosphere, the instrumentation and also to make some imaginative connections, for example, dividing the composition into three parts, one for each line of the music, or choosing an instrument for specific facets, like the flute for frost. These imaginative connections are somewhat arbitrary but make the music express its subject matter. Thereafter, it's a case of making those brush strokes and seeing - or rather listening to - what happens.

I apply as much theory about what could work as I can, particularly where harmony is concerned, also rhythmic phrasing, but then come endless repetitions of listening hard and making vital adjustmens to what sounds right. Somehow, the brain, which after all is the music-maker, recognises the right note and the wrong one as much for the composer as for the listener. Listen to Snow's Falling! and judge for yourself.

At its extreme, this painting-with-music can become a Jackson Pollock-esque creation of happenstance musical patterns ('stochastic' is the term used for random events, loved by experimental composers of the 1960s and 70s, John Cage springing to mind). But my method uses chance and design on the palette, alongside all the other musical colours.

Falling into this use of visual language to describe music is fascinating for a multitude of reasons.

It is difficult for a listener to cotton on to a new piece of music at the first listening, especially if it contains any challenges, but by suggesting or accompanying it with an image or images is a sure way of leading the listener in. Again, Snow's Falling! is an example, the simple image holds attention while the music plays on, weaving its detail into a coherent whole. We are used to background sound tracks creating atmosphere. Here, the opposite occurs, an image re-enforces the music's atmosphere.

Even without the video, the haiku is enough, conjuring a strong image. These haikus are ideal subject matter as their essence is to take a particular subject, one we can all recognise from personal experience, and incorporate into it an awareness of the universal. It is a small hook and bait to catch a much greater truth.

The history of the visual arts has an equivalent in music and there are some clear equivalences that can be made in describing the development of either genre, Impressionism (Renoir, Monet/Debussy, Ravel), for example, or, in the case of my four seasons meditations, abstract expressionism, although, of course, all music is abstract.

This reminds me of a short book, Fear of Music, by David Stubbs, subtitled, 'Why people get Rothko but don't get Stockhausen'. Its thesis is that art galleries have no problem attracting audiences for abstract art, while music struggles to find an audience for contemporary music. Using this thread, the book follows the phases of 20th-century art together with those of music happening at the same time. Recommended!

If you would like to hear the other three haiku meditations, go to  www.billanderton.uk/compositions.html.

Posted by Bill Anderton at 13:12 No comments: