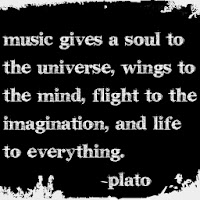 To explore the spirit of music, I'm inclined to spend less time on musica instrumentalis as this is the body of music whose bones have been picked clean by endless books and articles about music. It's the microcosmic and macrocosmic aspects that could be fruitful as they made up so much of the sum total of music's history and have largely been forgotten. Much of what has been said on this subject appears to be quaint, irrational, plain wrong and consequently thought to be irrelevant. I'm tending to move towards considering them in the light of a psychological understanding of the "imagination", not as fantasy but as a means of perception, a sort of eye on the inner workings of the human condition. For example, cultural myths, all born of human imagination, are a route to understanding the fundamentals of human behaviour.

More on this later, but first, I need more appealing terminology than the old Latin terms, to distinguish our three musical areas of investigation.  How about Mind Music, for what goes on in and comes out of the musical brain; Spirit Music, for its universal, philosophical principles; Body Music for the sounds made and heard from instruments, musicians, performances. I'll work with those for a while, see how they develop and if any better terminology emerges. At least this suits the modern holistic idiom, Mind, Body, Spirit.