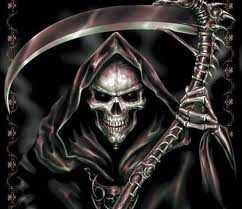 In Greek mythology Kronos was the god of time and I remember a Marvel Comic character in the pantheon of Silver Surfer, Fantastic Four, Incredible Hulk, etc., a supervillain called The Grim Reaper, another name also, I believe, for the Devil and his Scythe. In Roman mythology, Kronos is renamed Saturn and, astrologically speaking, Saturn classically marked the boundaries of the known universe. Within his orbital boundary time rules - and devours - all. Beyond it were supernatural dimensions.

Now to last Saturday night, feet up on the sofa, glass of a really good wine in hand, opening the packet of a brand new CD by the Kronos Quartet.
Founded by David Harrington in San Francisco nearly 30 years ago, this group of musicians has achieved rock-star cult status world-wide. Their signature is the exploration of new music and collaboration with numerous composers and projects. They are followed by a horde of fans and admirers and their concerts are always sell-outs. Kronos marks the boundary but they have managed to go beyond it and bring back, in shamanistic fashion, magical musical treasures.

How can this new, experimental music be so popular, given the usual fear and loathing of most contemporary experiments? It doesn't pull any punches: this particular recording, called, "Uniko" is a collaboration between the Kronos Quartet, Accordionist, Kimmo Pohjonen and Sampling Artist, Samuli Kosminen and is thus written for accordion, voice, string quartet and samples. Sampling is the process of recording short sound bites, then electronically manipulating and combining them to create a further instrumental "voice".

Music Concrète, or "Real Music", began in the 1940s with Pierre Schaeffer. It is an electroacoustic form of music that is not limited to musical instruments or the voice for the sounds that it captures and employs. The techniques of Music Concrète, then entirely something new, developed into electronic music. Sampling is not new in the 21st century, it has been developing over quite a period of time now. The result of combining a traditional string quartet with this creative use of electroacoustics works incredibly well.

Here's a fabulous quote that describes what I heard last Saturday: "Uniko is like an ocean tide coming in. Big waves of sound build in complexity, animation and sometimes sheer frenzy, then abruptly retreat into small lyrical moments." (Bernard Holland, New York reviewer)

This is the music that is defining our times. The thing that really makes me smile is that you can experience it from a sofa on a Saturday night in Newent.