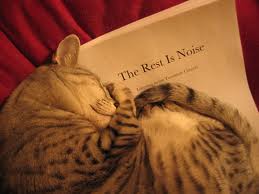 Music is a focal point for my world and I enjoy making connections between the music I hear and its place in the greater scheme of things. Connections are basic to living; no man is an island and so forth. It's when the component parts of a system are connected and working in harmony with oneanother that the best results occur, whether you are talking about a team, a family, an organisation, a machine,  or an orchestra. You could even view the orchestra as a metaphor for any other type of system. Any one part working in isolation affects the whole adversely but if all the individual musicians and the different sections are connected and are communicating with one another, then all is well.  It's a complex feedback system like any other and can be analysed as such.

Connections in music can be considered to be between composer-musician-audience, or between music and its historical context and so on. For me, the most important connection is with my daily life and enjoyment of different types of music. I'm listening at the moment to a new album by rock icons, Radiohead, called, "King of Limbs".  Now what has that got to do with serious classical or contemporary music? And why should you be interested? First, Radiohead, as creators of modern music, are interesting enough and significant enough for Alex Ross, music critic of The New Yorker, to give them fair coverage in his new book, Listen To This, a sequel to his seminal history of 20th century music, The Rest Is Noise.

Radiohead have a huge following among the rock and indie culture and are known for their collaborations, experimentation and, more recently, film scores (guitarist, Jonny Greenwood has written the sound track for the adaptation of Haruki Murakami's cult novel, "Norwegian Wood" and, yes, there is a Beatles connection). I reckon that far from their music being ephemeral, it will be heard in the distant future, just as we are listening to Mozart and Beethoven today knowing that those classics won't be diminished by time. Think of the excitement that Beethoven stirred in those who were open to his new music, just as there were those who thought it crude and missed the point when it was first heard.  Radiohead and their ilk are  creating the fire and brimstone music of today that has connected with their listeners, which, to use the vernacular, speaks to them.

Of course, they are not everyone's cup of tea, but, like Alex Ross, I'm pointing out Radiohead's connectedness to the power of music and to their ability to compose and communicate it. There will only be a smattering of such musicians remembered in the distant future and my guess is that they belong to this elite.  Unfortunately, I won't be around to discover if I'm right.

One thing is for sure, their music hasn't just appeared out of nowhere. It is clearly connected to the culture it is born out of; it is influenced by prior ones; it uses the same musical ideas that began development hundreds if not thousands of years ago. A biographer would immediately discover a web of musical connections stretched across present space and past time. It's this web that gives the music credence and depth. In isolation it is nothing.